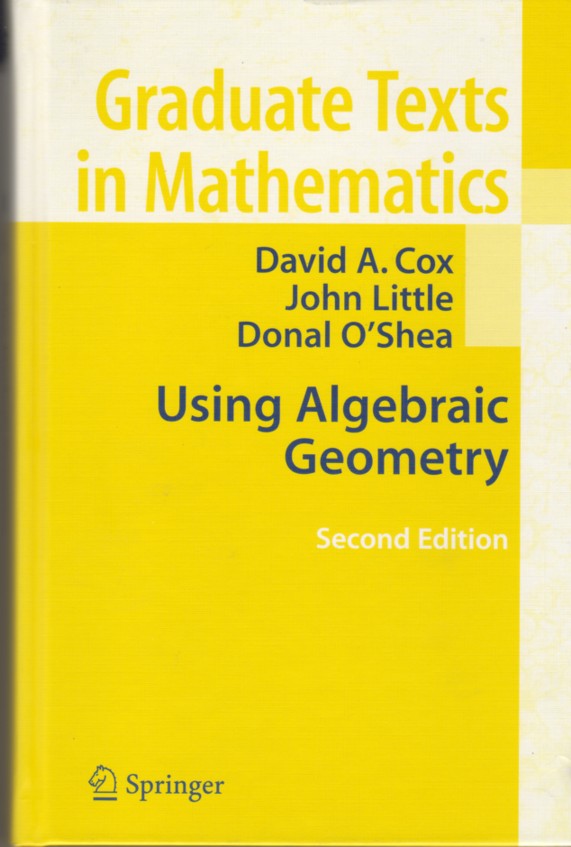 This book is an introduction to Gröbner bases and resultants, which are two of the main tools used in computational algebraic geometry and commutative algebra. It also discusses local methods and syzygies, and gives applications to integer programming, polynomial splines and algebraic coding theory.

For more information about the book, see the publications page of John Little.

A list of typographical errors is available for the first edition of Using Algebraic Geometry: pdf or postscript .

A list of typographical errors is available for the second edition of Using Algebraic Geometry: pdf .

First Edition: The Maple code for the first edition of Using Algebraic Geometry was written for Releases 3 and 4 of Maple V. Some of the code in the text uses commands from the grobner package, such as "gbasis" and "finite".

In Release 5 of Maple V, the grobner package was replaced with the Groebner package. In this package, some commands (such as "gbasis") have a different syntax, while other (such as "finite") have different names. Hence, the Maple code in the first edition will need to be modified if a reader wants to run it under more recent versions of Maple.

Second Edition: In the second edition of Using Algebraic Geometry, the Maple code was rewritten to be consistent with the Groebner package that came with Release 5 of Maple V.

Starting with Maple 11, the Groebner package was updated, so that some commands have different names ("gbasis" is now "Basis") and some of the syntax is slighlty different. Hence the Maple code in the second edition will need to be modified if a reader wants to run it under more recent versions of Maple. A document describing some of these changes is available as either pdf or postscript .

The catalog entry for Using Algebraic Geometry in the Springer-Verlag on-line catalog contains a brief description of the book and also includes ordering information.

You can contact the authors at the following email addresses: